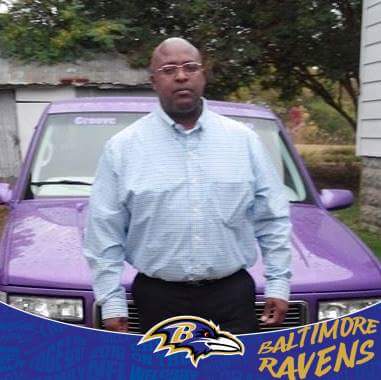 Willie, born April 28, 1968 in Baltimore, MD was the second of four children and the only son of Willie James Jackson, Sr. and Mamie Carolyn Hall-Jackson.  He attended early school in Baltimore, MD and earned his high school diploma from Cambridge-South Dorchester Senior High School in 1987.  In 1990, he joined the Army and served honorably for four years.  Willie was a hardworking man.  It wasn’t unusual for him to hold a full time job and still work a part time job or two.  He was currently employed by Valley Protein in Linkwood and Ganders Car Wash in Easton.

Growing up Willie attended church regularly and had given his life to the Lord as an adult.  Over the past year, he rededicated himself to the Lord through daily prayer and hearing God’s Word for his life.

Willie enjoyed fishing, cooking, and watching his Baltimore Ravens.  He enjoyed the Ravens so much that he decorated his truck with Ravens’ memorabilia.  Willie would tell anyone who would listen about the one that got away or just how much better a fisherman he was than anyone else.  Out of a love for cars, Willie and two of his high school friends started a car club called “Groove City Auto”.  He had a wonderful sense of humor and could always get you to smile or laugh even at his sometimes corny jokes.  Willie touched the lives of so many people in such a positive and joyous way, to know him was to love him.

To order memorial trees or send flowers to the family in memory of Willie Jackson Jr., please visit our flower store.