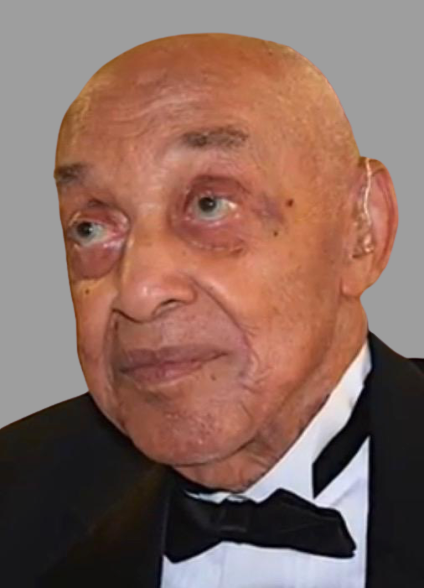 William Wesley Giles departed this life on the evening of his 105th birthday, Saturday, July 18, 2020 at his residence.

William was born on July 18, 1915 in Cambridge, MD, son of the late John Henry Giles and Mintie Waters Opher Giles. He grew up in the Harrisville community in Woolford, MD, just outside Cambridge. He was raised in a Christian home, just across the road from the church, St. Paul United Methodist.

At the age of 12 William went to Cambridge to live with his oldest sister, Irene and her husband, so he could attend high school. During those years he attended Bethel African Methodist Episcopal Church.  A  fond memory of those years was taking violin lessons from the pastor, Rev T.A. Scott.  He was a proud graduate of the Cambridge Colored High School Class of 1931.

After High School William returned to Harrisville.  In 1934 he married Wilhelmina Reynolds. They were parents to three   children, Louella M, Sylvia O. and Barbara D. Giles. The oldest, Louella M. Giles died in infancy. They later moved to Cambridge. Wilhelmina passed away in 1943.

William at times worked in Baltimore, MD, returning home on the weekends. There he worked at Bethlehem Steel at Sparrows Point, and at The Martin Company building airplanes during war time. He was also one of many who worked at the Phillips Packing Company in Cambridge. His last place of employment was Western Publishing Company in Cambridge where he worked as a heating and air conditioning technician. He was the first employee hired when the company came to town.

God and family were most important to him. Faith in God and commitment to serving were evident. He loved to sing and in early years was a member of The Royal Nightingales, who sang on a Radio show and at various events. He recalled them being asked to sing downtown in Cambridge for a public celebration at the end of the Second World War.

A widower, he married Pauline Maddox Vodery in 1954. They were married 64 years at the time of Pauline’s passing in 2019.

He joined Bethel AME Church in 1947 and faithfully served there for over 75 years. He served as a Steward, Trustee, member of three choirs, a founding member and President of the Progressive Male Chorus, and was active in the Men’s ministry and Bible study.  He chaired the first Homecoming at Bethel and the Remember the Struggle Luncheon. He supported other activities for the benefit of the church including The Poor Man’s Supper. The Luncheon and Supper were meaningful to him because of his interest in Civil Rights, past, present and future.

He never forgot his “down home” church, St Paul, and faithfully supported the church and cemetery until his passing.

William stayed busy. He loved reading newspapers and keeping up with the state of affairs of the world. He voted regularly and was happy to be able to vote, at age 93, for the first African American President of the United States, Barack Obama.

Baseball was his favorite sport and he was known to stop for an Orioles game before heading back to Cambridge when he worked in the city. He loved and cherished his friends. He was blessed to spend time and celebrate with lifelong friends, Mildred Myster, Leon Banks, and Asbury Jones during these last five years. One of his favorite activities during over 40 years in retirement was gardening, a hobby he shared with friends. He loved to see something grow.

Family was treasured. Holiday and birthday celebrations meant working with Pauline to prepare a feast, decorating the home, playing games and laughter. He loved his wife and penned beautiful love notes to her in cards. He loved to drive and in the early years of their marriage, piled their teenagers in the car and drove them to the Jersey Shore to stay with grandparents and work during the summer. William and Pauline worked on church projects together, visited the shut in and friends residing in nursing homes, took day trips to visit their children and their families, and enjoyed planning and working on projects together. He was a praying man. He prayed daily and often, sending up prayers for his wife, all his children, grandchildren, great grandchildren, and great-great grandchildren. He ended asking God to bless him. On Saturday, July 18, 2020 a few family members sang happy Birthday to him for the last time. He later      quietly slipped away.

To order memorial trees or send flowers to the family in memory of William Giles, please visit our flower store.