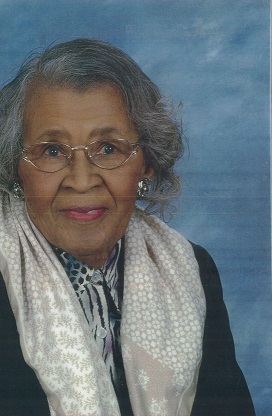 Mrs. Violet Sylvester Burke Brown was born to the late Walter B. and Martha Burke in Burrisville, Queen Anne’s County, MD on August 29, 1922.  After years of residing in Burrisville, the family relocated to Grasonville, MD, where she attended the School for the Colored in Grasonville and Centreville, MD.  Their last permanent location was Queenstown, MD.She was educated in the public schools of Grasonville and Centreville, MD.

In 1938 she married the love of her life, the late Charles Leonard Brown.  From this union were born two children:  Barbara Ann [deceased] and Mary Lee.   She was a devoted wife and mother.

Upon entering the work force she was a volunteer driver for the Board of Education in Centreville, MD for years.  She used her car to transport students from their homes in Queenstown to Grasonville Elementary School.   She worked a variety of jobs throughout her life as a cook, performing domestic services, and in the seafood industry at Kent Narrow, MD.

In her younger days, she always enjoyed going to shows, dining, reading and other activities.  She also enjoyed traveling with her daughter Mary.  She always reflected that those were some of her best times spent with her family.  She was a “people person” believing that one of the things in life was to be kind, loving and good to everybody.

She learned to read and play music at age seventeen.  Piano playing was her favorite passion along with crocheting, drawing, knitting, and planting flowers.  She accepted Christ at an early age. She joined Robinson A.M.E. Church and was a faithful member for over 75 years.  As a member there she assisted the late Winifred Queen and Pecolia Butler by playing for the Senior Choir. After their deaths she then became a full-time pianist for over sixty-five years.  She loved singing the hymns of the Church.  She also enjoyed playing for and traveling with the Men’s Choir for over fifty years. Her favorite colors were purple and burgundy.

The family is comforted in knowing that MaMa is now in glory playing piano for the Heavenly Choir, after hearing the Lord say “well done, thy good and faithful servant”.

To order memorial trees or send flowers to the family in memory of Violet Brown, please visit our flower store.