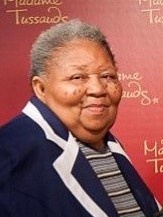 Valerie Ardelia Ross Manokey peacefully passed away in her sleep on Wednesday December 9, 2020 at Chesapeake Woods Center in Cambridge, Maryland. She was born on January 16, 1936 in Cambridge.  Valerie was the oldest of the eight daughters born to the late Owen and Mabel Kiah Ross.

Valerie lived in Cambridge her entire life. She attended the segregated schools in Cambridge, including F.D. St. Clair High School. Valerie married Calvin Manokey and together they raised six sons. They were married for more than 60 years, until Calvin’s passing in 2019. After raising her sons, a delight to Valerie’s heart was Makesha (Kesha), her granddaughter, who came to live with her at a very young age. Valerie now had the joy of braiding hair, buying pretty dresses and baby dolls for a girl.  In later years, Valerie also had the opportunity of parenting Kalynda, KaQuina (Roderick), and Kyrie, her grandchildren whom she adopted.

Raised by parents who by word and example taught her to love and honor God and to love others, Valerie followed in her mother’s footsteps in becoming a member of Bethel A.M.E. Church, where she was active from her childhood days onward.  Throughout her youth, she also often attended her father’s church – Mount Olive Baptist Church. Valerie’s favorite hymns are “One Day at A Time” and “Because He Lives”.  Whether personally or as a part of her work, Valerie was always concerned about helping those in need and was willing to offer words of comfort, advice, and to bring some laughter to the lives of others. Because of her caring nature, Valerie became everybody’s mother.

After working for some years, Valerie completed her GED and then attended and graduated from Sojourner-Douglas College in Baltimore in 1985 at the age of 49.  She earned a degree in Social Work.


Over the years, Valerie had the opportunity to have varied work experiences.  However, a job that meant so much to her was her years working for the Dorchester County Schools as a teacher’s aide and, during the summers, in the program for migrant children.  Valerie also cherished her many years working for Dorchester County Department of Social Services. In these jobs especially, Valerie was able to use her God-given talents to mentor, coach, teach, support, and encourage both children and parents. After retiring, Valerie often was greeted by many of the children (most now adults often with children of their own) who remembered her and thanked her for the help and kind words that she had given them along the way.

Even before her retirement years, one of Valerie’s passions was to help educate children and adults about Harriet Tubman, her great-great-great aunt through the Ross lineage. Over the years, often accompanied by her nephew, Charles Ross, she attended and sometimes spoke at several events that celebrated the life and works of Harriet Tubman. Valerie and other family members attended several events throughout Maryland.  In October 2013, Valerie and Charles made a special trip to Columbia, South Carolina to speak with elementary students and to participate in a panel discussion at the opening of the Benedict College art exhibition celebrating the life of Harriet Tubman.

As the first of eight girls, Valerie took her role as “oldest” very serious and often exhibited her” take charge” leadership in family gatherings.  As her parents aged, experienced some medical crises and were in need of assistance, Valerie was often the daughter to take the lead in assisting them in getting to medical appointments and assisting with home care.  She (with Shirley and Betty) also kept watch over Uncle Leon and Aunt Marian and quickly responded whenever there was an emergency call.

With a family as large as the Ross family, there are many stories to share about family members.  Of course, there are many “Valerie Stories”, like the story about her first airplane ride when, several minutes into the flight, she was still holding Yogi’s hand waiting for the plane to take off even though they were already in the air and flying toward their destination. (Valerie had the treat of being the first to board when wheeled onto the plane by the pilot and received applauds from other passengers when the stewardess announced that this was Valerie’s first trip by airplane at the age 77.)   Because Valerie truly enjoyed a funny story and any opportunity for heart-felt laughter, sisters were given a safety warning for anytime Valerie was driving.  The warning:  DO NOT make Valerie laugh while she is driving because she closes her eyes when she is into a deep laughter, even while behind the wheel! And there was Pooch, a little Jack Russell terrier that Valerie dearly loved.  The sisters knew that any time they called Valerie on the telephone, at some point Valerie would be talking about Pooch, talking to Pooch, or encouraging you to talk to Pooch.  The dog was great company and great comfort for Valerie.

Among the sisters, Valerie reigned as the best cook.  She enjoyed feeding folks and you could often find her cooking up family favorites.  Often her sisters asked for her home-made, butter-filled cake with slow-cooked chocolate icing. Her family and friends have many fond memories of many gatherings where all enjoyed great food, conversation, and lots of laughs.   Valerie was a talker and loved to be around people. Even is her last days Valerie was sharing the joys of fellowship with others. The staff at Chesapeake Woods shared with the family that in the days before her transition, Valerie was having a beautiful day talking and sharing lots of laughter with staff and other residents.

Valerie was preceded in death by her parents, her husband Calvin, her son Mark Manokey, sisters Bernice Carney, Shirley Ross, and Daisy Wayns. Other close relatives who have passed on include an aunt Nicey Ennals, an uncle Leon Brown, aunt Marian Sampson Brown, and first cousins William Ennals and Muriel Ennals.   Valerie Manokey is survived by her five sons, Calvin, Lenot, Kenneth and Bruce Manokey, all of Cambridge, Maryland and Lawrence (Valerie) Manokey of Concord, Delaware.  Including the grandchildren who lived with her, Valerie also leaves to cherish her memory 14 grandchildren, including her oldest graddaughter Jacqueline Henry (Melvin) of Hurlock, Maryland.  (Jackie kept her grandmother stylishly dressed in gifts of fashions and accessories for holidays, birthdays, or “just because”.)  In addition, Valerie is survived by 30 great-grandchildren and 3 great-great grandchildren.  She is also survived by four sisters, Barbara Stanley of Columbus, Ohio, Betty Ross of Easton, Maryland, Marian Macbeth of Richmond, Virginia and Peggy Ross of Cambridge, Maryland and favorite sister-in-law Geneva Stanley of Cambridge; an aunt Virginia Camper of Cambridge   and an uncle Elenzor (Len) Camper (Gladys) of Cambridge; a host of nieces, nephews, cousins, family members-by-choice, and friends.

Particularly after Valerie passed her 80th birthday, when asked how she was doing she would often respond, “I’m still here.”  Valerie believed God had her here for a purpose and she had work to do.  Now her work is done, and God has called her home.

In lieu of flowers the family requests memorial donations be made to Henry Funeral Home.

To order memorial trees or send flowers to the family in memory of Valerie Manokey, please visit our flower store.