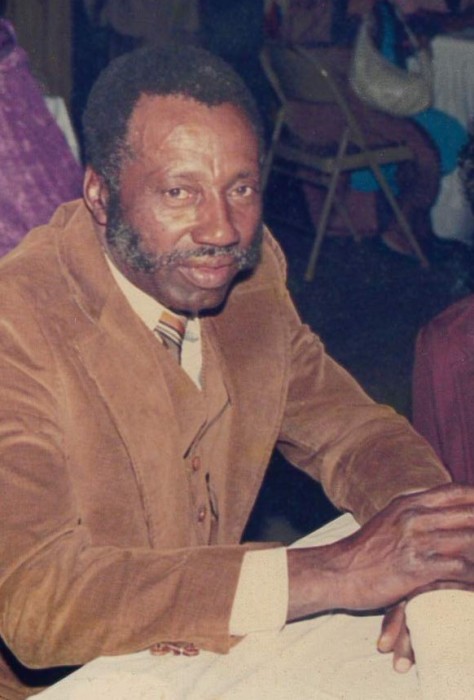 “This is my Story”

For those of you who knew me, and I am sure there are many of you reading this story knew me, so you may have called me or remembered me by the name… Theodore, Snags, Cephas, Dad, Pops, Pop -Pop, Pop-Pop Theodore, Great-Grandpop Theodore, one of those Cephas boys, Theo, The Rabbit Dog man, Mr. Ted, and, Mr. Cephas.  Over the years, I have answered to all of these names.

On May 19, 1931, I was born to the late Josiah and Hattie Stanley Cephas in Fork Neck, Maryland, and they gave me the name, Theodore Hansel Cephas.  I was one of 14 children. I was the 7th son, and a unique one.   I liked to have fun, and I guess I was somewhat of a jokester J. Growing up on a farm, there was always chores to do – feeding the cows, feeding the pigs, feeding the chickens, getting eggs from the hen house, plowing the fields, picking the vegetables and getting it ready for the market.  When it was time for the male hogs to lose their manhood, my brother Elton and I were a team – Elton could flip a 200lb hog on his back like it was nothing to it, and I’d use the knife to do the rest.

If you ask my brothers and sisters, they would say, Theodore is something else. On Saturday nights, I would come home from in town and scare my sisters, Shirley, Shelby Jean and Jeannette so bad. I’d throw some rocks at the window, making them think someone was outside. Then, I’d climb on the roof (as they ran upstairs) and I’d throw more rocks at the window.  I told you, I was a unique one.  If you wonder where my younger sister, Jeannette got the nickname, Puffy Wuffy – I gave her that name. As a matter of fact, I gave all of my younger brothers and sisters a nickname.  If you fell asleep and I was around, I might put some sugar in your mouth, or I might put a feather in your ear to wake you up.  Growing up, I attended Waters United Methodist Church in Fork Neck; I attended a many camp meeting services.

I went to school in Dorchester County, finishing up at F. D. St Clair High School, class of 1949. Now, I was not your traditional student who went to school, did my work, behave myself- I figured I had to go to school so I might as well have some fun. Now I told you there were 14 of us, 10 boys, so we had a lot of hand-me-down clothes. In high school, I would leave home with two sets of clothes on – I had my brothers Landy and Elton’s dress pants on underneath my bib overalls. When I would get to the end of our lane (waiting on the bus), I would take my bibs off throw them in the woods so I could put them back on when I came back home.  I wanted to have some smooth clothes on so the girls would notice me. One of the ways I would get the girls attention was, I would pull their hair, walk away and pretend I had nothing to do with it.

You remember I said, I liked to pull on the girls’ hair, well one of the girls whose hair I pulled on was a special kind of girl – she was pretty, she was nice, she was smart, and could definitely sing. I liked her so much, and I started courting her. Her father liked me too; when I was courting her, her father and I would talk about sail boats and rabbit dogs. That was a good thing. It wasn’t long after courting her, I asked her to marry me.

In 1958, I married that special girl, my classmate and friend, Ernestine M. Harris – Cephas, and from that union we raised three children, Carla, Theodore, Jr. and Altamese.  We made our home in Vienna. Saturday nights was our going out to dinner night, we would go to English Grill - they had some really good chicken. When English Grill went out of business, Kentucky Fried Chicken became my favorite chicken restaurant. Momma and I also enjoyed shaking a leg, one of our favorite songs to dance to was “Misty Blue”.   I was a member at Wesley United Methodist church, I was a part of the trustee board.

I enjoyed working, and I was a hard-worker.  In the winter months, I worked on the water, dredging for oysters. I was the first mate, on the now historic sailboat, “The Rosie Parks (in 2013, this boat was restored at the Maritime Museum, St. Michaels, Maryland.)  If you look up my name, you will see pictures of me standing aboard that vessel.  Growing up on a farm, it was in my blood to keep farming. In the spring through fall months, I worked in the farming industry; first with Fred Eberspacher, then with the Nabb’s (Carlton and George) and then, with my friend Henry Handley, and when Henry passed, his daughter Libby Anne and her husband, Chris took over the farm.  I worked with them until 2016.   Libby Ann has always been so helpful to Momma (Ernestine) and I, we appreciate her. Good Lord, I almost forgot to tell you – in the spring and summer months for over 20+ years, I worked nightshift at Friel’s Cannery in Queenstown, Maryland.

When I was younger, I liked to go bullfrogging – that’s catching bullfrogs. One of my all-time favorite hobbies was hunting with my rabbit dogs – I had some of the best rabbit dogs that you could ever imagine. I would drive to the Western Shore, to Virginia to buy a good rabbit dog, and I didn’t mind spending the money.

Now another thing I thought was fun to do was to teach my children and grandchildren how to drive.  Now, Momma (Ernestine) didn’t like that but, I would let them drive on the highway and drive to the store by themselves as young as 10 years old.

Listen, I could go on and on with telling you about my life. The good Lord has blessed me to live to see 89 years, and they have been some good years. In my last few years, some of you remember seeing me driving around in my green Ford F150 pick -up truck or you may have seen me driving around in Momma’s (Ernestine) red Mercury Marquis.  Well, I am not going to need either one of those vehicles, because on Thursday, December 31, 2020 - God called my name and beckoned me home to heaven.

To my children, Carla and Altamese (Emery); my grandchildren, Angel, Trevor, Taishika, Tyren, Ashley, Emory, Jr. and Crystal, and all of my great-grandchildren, my sisters, Shelby Jean(Jesse) Fenwick and Jeanette Cephas; and my brothers, Elton Cephas, and Weejay (Edie)Cephas , my sisters-in-law, Delores Molock, Floretta (Isaac) White, Betty Harris, and Joyce Cephas, and all of my nieces, nephews, cousins, friends and neighbors, I want you to “trust in the good Lord with all your heart, do not depend on your own understanding and in all your ways, acknowledge the good Lord, and He will make your path straight ( from Proverbs 3:5-6).

Okay, I can tell you more when you join us in heaven but for now, I am being summoned to my heavenly home, I am going to be with my wife, Ernestine, my parents, Hattie and Josiah, my sisters: Celia Mae Simmons, and Shirley Butler, my brothers: Arnold, Junior, Melvin, Cleamon, Landy, Dolbert, and Arnold P. Cephas, and all of my other family and friends that have gone before me.  Continue to do the work that God has called you to…for this is my story, this is my song, praising my savior, all the day long!”

Until we meet again, love you all and keep the faith!

To order memorial trees or send flowers to the family in memory of Theodore Cephas, Sr, please visit our flower store.