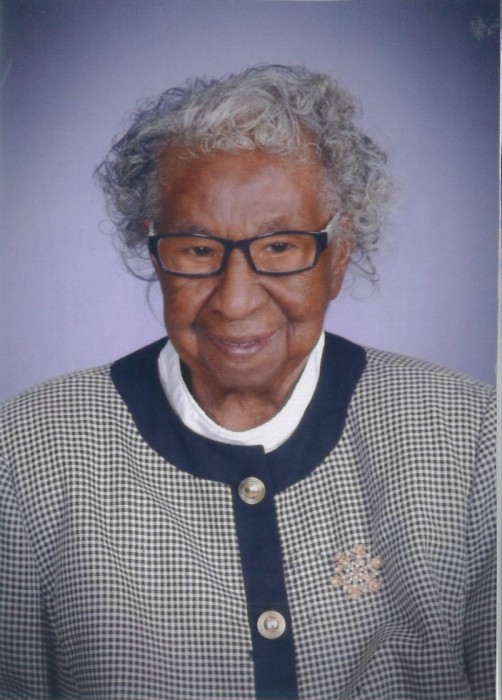 Theo Price Brice, at the age of 96, passed from time to eternity on Thursday, August 18, 2016 at her home in Easton, Maryland.

She was born in Skipton, near Cordova, Maryland on December 15, 1919 to the late Grant Wilson Price and Margaret (Maggie) Morris Price. She was the last surviving member of ten siblings.

She attended the public schools of Talbot County. She completed the 8th grade. At the age of 13, her first job was working for a private family on St. Michaels road. She “lived in”, waited tables and did the cleaning. She moved to the Philadelphia area when the Banner family, with whom she was employed, relocated to that area. After three or four years she returned to Easton and went to work at Sts. Peter & Paul Church and School. She cleaned and cooked for the Priest and also worked nights at Trappe Frozen Foods. She worked there for a number of years until Father Irvine's retirement. She also worked at the Clam House, Silco Department store and the sewing factory.

Aunt Theo married Melvin Brice, on February 16, 1940. She was married for about three years when her husband died in an accident. She continued on her journey alone, doing “days work” and helped her sister-in-law to raise her children.

In 1948, she purchased a parcel of land for $200.00, which is known today as 252 Glenwood Avenue, which also became known as the gathering place for family and friends. Her brother Frank, along with the Haley brothers, built the house as it stands today.

Aunt Theo received her early christian training at the Methodist churches in Newtown and Longwoods. As a young adult, she joined Union Baptist Church in Hammondtown and began her singing career with the Twilight Jubilees. She continued singing the songs of Zion with the Union Main Choir, the Voices of Revely and the present day Union Baptist Mass Choir. She retired from the choir August 2015 at the age of 95. Through the years, Aunt Theo has served as Pastor's aide, Usher Board, Sunday School Union, Ways and Means, and Parrish House Committees. She was instrumental in forming the Senior Unionites Club. Aunt Theo, faithfully attended Bible Study, Sunday School and regular worship services. Her favorite hymn was “Past Me Not O Gentle Saviour”. Her favorite scripture was Psalm 23. Aunt Theo loved the Lord, her church family and her family unconditionally.

From infancy and down through the years, Aunt Theo supported her nieces and nephews spiritually and financially. She loved children, she loved giving gifts and she was always there to give valuable advice whether you wanted it or not. Her hobbies were sewing, cooking, fishing and crocheting. Her delicious rolls, scrumptious cookies and perfect lemon meringue pies will be truly missed. She loved the color blue and she loved to laugh with you.

In addition to her husband and parents, she was preceded in death by eight  brothers, John, Harvey, William, Grant, Robert, George, Leon, Frank, and two sisters, Mary Hester Bowser and Pearl Copper .

To order memorial trees or send flowers to the family in memory of Theo Brice, please visit our flower store.