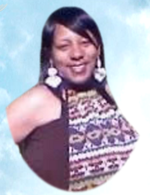 Kia was educated in the public school system of both Northampton County Virginia and Talbot County Maryland. Kia was known to have a funny laugh, big smile and an even bigger heart. She loved family and friends a lot and she always put God first. Kia was a natural caretaker, she was employed with various agencies as a companion or CNA. Kia was also self-employed, as well as being very giving. When she wasn’t taking care of family, friends, patients, or strangers, she was cooking for them. Cooking was a passion of hers and she infused every dish with love. Y’all know how she had Blake street jumping on the weekends with those dinners. Singing was also a passion of hers. To know her was to love her. Kia was a big hearted, kind and lovable spirit. One of the sweetest people you could ever know but she didn’t take any mess either.

To order memorial trees or send flowers to the family in memory of Shajuana Franks, please visit our flower store.