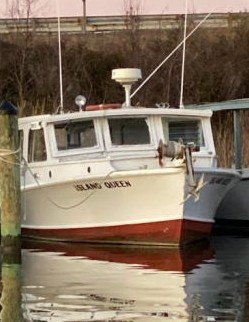 Sammy was educated in Queen Anne’s County Schools and attended Bowie State College.  He was employed by the Dept. of Health and Mental Hygiene (State of MD) for 20 years until his health began to fail. Sammy was a man who could accomplish anything he put his mind to — he always put family and friends first!  When anyone needed anything, he was there to give a helping hand, direction or opinion.  He had a knack of always being available to help out someone in need, whether you needed a crew of workers to help with a project, a lending hand, a ride, money, advice or just support — he was there not judging but fulfilling the need!

Sam’s favorite hobby was his boat and getting ready for the upcoming fishing season.    He inherited  his love for all things Eastern Shore and the waterman life from his father, uncles and so many other Grasonville waterman.  He loved all of his boats from Cold Tomatoes, Cornbread, and most recently “Island Queen”.  You could always depend on oysters, fresh fish, and crabs for family and friends.  He always wanted to make sure his church family had all the seafood they wanted.  You could count on riding down to the kent Narrows boat slip and seeing Sam holding court with his buddies — they had fun sharing fishing tales, tall tales and just shooting the breeze.

Sammy’s life seems too short but for those he touched — even in the smallest way — the memories of the person he was will be cherished forever.

Love lives on — the pain eventually passes, but the beauty of the life Sam lived and the lives he touched will remain.  A special man has gone from our midst but he will never leave our hearts— he could not live forever but his legacy will live on…...

To order memorial trees or send flowers to the family in memory of Samuel Bouldin, Jr., please visit our flower store.