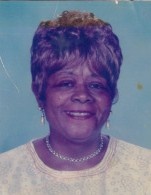 Rose “Dottie/Didy” Bowens, 72 of Cambridge, Md went to be with the Lord on December 17th, 2019 at University of Maryland Shore Medical Center at Easton. She was on born May 22, 1947 in Cambridge, Md to the late Walter Thompson and Juanita Cornish Thompson. Rose was educated in the public schools of Dorchester County. She graduated from Mace’s Lane High School in 1965.


In 1974, She married her late husband Alfred Bowens in Washington D.C. Years later she returned to Dorchester County where she held several jobs in Dorchester County, but the most rewarding job that she dedicated her life to for over twenty years was being a Physical Management Assistant in the Dorchester County School System, until her health declined in 2018.
Rose loved her family and friends and would support and encourage them in any endeavors. She enjoyed fashion, coloring, making jewelry and cooking. Lastly, she had a heart of gold and would give her last to anyone that need it whether they were family, friends or a total stranger.


She was preceded in death by her parents Walter Thompson and Juanita Cornish-Thompson and In-laws. Her husband for over 40 years Alfred Bowens, brother Robert Cornish and sister Evangeline.

To order memorial trees or send flowers to the family in memory of Rose Bowens, please visit our flower store.