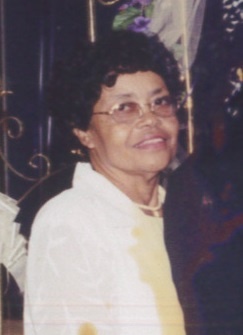 December 7, 2017 at 5:40 A.M. God, called your name reached for your hand and gently lead you to that quiet, peaceful and loving place he had prepared for you.

Roberta Evelyn Sampson, 85 was born on July 21, 1932 to the late Essie M. Jackson Camper and the late John Lankford McCready.  Roberta, also known as Birdie, was raised in Crapo, MD by her grandmother Mary Jackson. She was also raised with a close cousin, Emerson Jackson. People often thought they were sister and brother. Birdie attended school in Crapo, MD, and later transferred to F. D. St. Clair High where she graduated.

Birdie meant the love of her life John Wesley Sampson, Jr. around the age of 15 years old at an Oyster Supper in Crapo.  They married February 28th, 1954 in Cambridge.  They raised 8 children together and stayed together until his death January 13, 2016. Birdie loved the Lord and was a devoted and faithful member of St. Luke UM Church for 45 years.  She was an usher and served on the Usher Board, and held other positions in the church until her health started to fail.  She loved her church and loved attending.  She knew and believed that her health and strength came from the Lord.

In addition to her parents and husband, she was preceded in death by her daughter, Ruby, great granddaughter, Ja’Kaziyia Travers, a brother, Rayfield Jackson, a sister, Lucille Jackson, a special sister-in-law, Elaine Stafford, brothers in-law, aunts, uncles, cousins and friends.

To order memorial trees or send flowers to the family in memory of Roberta Sampson, please visit our flower store.