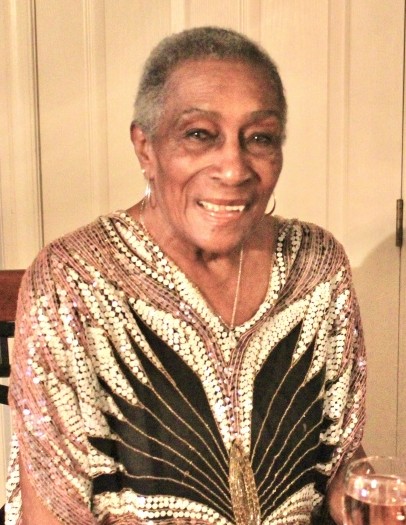 I belong, the Lord has willed it so.  He guides my steps and He knows best.  He will not harm where

He has blessed.  And so goodnight, I'll take my rest where sweet wild roses grow."

Novella Mae Ennals Camper was born on the Eastern Shore Dorchester County, in Cambridge Maryland, on March 9th 1933 to the parentage of Ailene Ennals and Raymond Adams.

She was raised in a Christian home by a loving mother and caring, generous stepfather, Howard Seymore.

Novella was christened at an early age and spent her young years and early adulthood in St. Luke United  Methodist Church in Cambridge, where she attended Sunday and Vacation Bible School, which was held in the summer months at Rock Church, where she played the piano for the youth.

Novella attended St. Clair Elementary School and Frederick Douglas High School in Cambridge. She was an   exceptional student in school and an excellent orator. She belonged to the Public Speaking Club and once enrolled in a Maryland, statewide contest to write an essay entitled "What America Means To Me". The first place winner was to be awarded the grand prize of a $50.00 war bond, no small amount in the 1940's.

Being the oldest of six (6) Novella assumed many responsibilities toward her siblings while her parents worked. She prepared them for school in the mornings and tidied the house before she left for school. One morning she sent Charlotte to school without taking off her stocking cap because she wanted to sit in the parlor alone and enjoy the quiet, clean space. She loved her baby brother Tyrone and purchased all of his school clothes every year.

As a teen she worked in the fields, the tomato houses and she picked crabs. Also, during this time she was offered a modeling contract with Colgate Toothpaste because of her prefect teeth and smile.

In the 1950's she married Eleanzor Camper. When she became a mother she continued to be a meticulous      housekeeper and an exceptional mother. In 1959 Novella relocated her children to Los Angeles where she        continued their religious lives and attended Bowen Memorial United Methodist Church. Her children and home were always spotless!

Novella encouraged all her children to excel in whatever they chose to do and she lived to see one son become a Judge of the Los Angeles County Superior Court, another son become a professional basketball player in France and at her passing she has a grandson soon to become a medical doctor.

After raising her children to maturity she moved back to Cambridge where she worked for a period of time at the crab house and resumed her membership at St. Luke United Methodist Church. She joined the Mace's Lane   Alumni Association working in conjunction with her brother Tyrone until fairly recently.

Novella was a people person and had many, many friends. She was vivacious and fun loving. She loved to dress and stood tall and regal in her clothing at 5'9". God blessed Novella with eight (8) children.

Preceding her on her journey other than her parents were two daughters, Lenette and Kimberly, two sons, Gregory (Pecky) and Lonnie and also her first born grandchild, Sherlette. Two sisters of Novella also preceded her,    Nazatter and Ethel.

" A life well spent moves to Morn just begun, greeting the dawn and not the setting sun."

To order memorial trees or send flowers to the family in memory of Novella Camper, please visit our flower store.