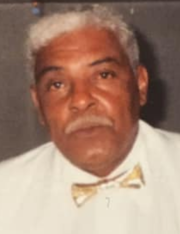 Boogie attended Talbot County Public Schools, and then relocated to pursue a security

guard job in Rhode Island where he resided for 30 years. He was employed with several

worked as a handy man and cut grass for family and friends. Boogie enjoyed singing with

time with family and cruising the streets of Easton on his lawn mower.

of Cordova, MD, Rosalee Anderson of Baltimore, MD, and Lillian Stewart of Ridgely,

To order memorial trees or send flowers to the family in memory of Norman Jones, please visit our flower store.