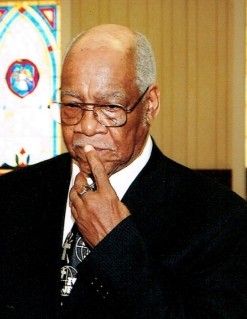 John Floyd Wilkins, Sr., affectionately known as “Pop” or “Frosty” was born on November 9,
1927 and made his triumphant return home on January 15, 2021. He was the youngest, yet oldest
living child of the late Ruth G. Wilkins and George T. Wilkins, Cheriton, Virginia.


He later met and married Jessie M. Saunders, a native of Eastville, VA. whom he affectionately
called “Mama” and cherished that marriage for 48 years. His wife came home one night and
announced that she had accepted Christ into her life. Her impact was so great that Pop accepted
the Savior as well. No matter where Pop traveled, he always shared the Gospel of his Savior at
every opportunity. Pop was a great man of Faith, strength, talent, and courage. His mission was
to serve God with gladness and to use the gifts that God placed upon him through music and
singing while serving in any capacity. His greatest assets of life were his wife, his children,
grand/great-grandchildren, and his music. Pop took his responsibilities of a husband and father
very seriously.


“Frosty” was an avid baseball player (was noted as one of the best among local baseball players
of the 50’s), a fan of boxing, wrestling, basketball, football, and westerns.


Cooking was such a pleasure to Pop and each family member has one, two, or more favorites,
but the most well-known among others are: the large juicy hamburgers (that would over-extend
the bun), fried chicken, white potato pie, skillet steak with onions, and cold iced tea. When
traveling to visit, he would always make sure that there was something to eat and wouldn’t allow
anyone to leave without taking something with them. If you didn’t need it, he would say, “well
give it to somebody, I know somebody need it”.


As a member of Mt. Pisgah Holy Church, he directed and participated in the Music Ministry,
Choir, and Men’s Ministry. He sang with and orchestrated many groups: The Faith Travelers
(his family), Guiding Stars, and the Holy Stars (Fairview, VA). Whenever the call would come
day or night Pop would not decline and would arrive with fingers ready to tickle the ivories.

To order memorial trees or send flowers to the family in memory of Minstrel John Wilkins, Sr., please visit our flower store.