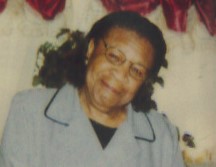 Born March 9, 1925 in Cambridge, she was the daughter of the late Carl and Viola Dennis.

She was educated in the public schools of Dorchester County and was a graduate of St. Clair High School.

Marie formed a union of love with the late James McKnight.

Affectionately known as Rita, she was a warm, kind hearted, and loving person who loved her family.  She would give and help anyone that she could. She enjoyed baking her homemade rolls, sitting on the porch drinking her Coke sodas, watching Victor Newman on the Young and the Restless, and all of Madea’s movies.

Marie was a member of Waugh United Methodist Church and was employed with Kool Ice Seafood until her health failed.

Her memories shall be cherished by her son Frederick Dennis and daughter Darlene McKnight both of Cambridge; five grandchildren: Victoria Williams, Angie and Frederica Dennis all of Baltimore, Tiffany Dennis of Newark, Delaware and Crystal Banks of Cambridge; numerous great grand and great-great grandchildren; a special cousin, Monroe Smith; a niece, Cheryl Cornish (James); nephew, Timmy Rowley (Sherry) and a host of other cousins, relatives, and friends.

In addition to her parents, she was preceded in death by her husband, James McKnight; two children: Virginia and Michael McKnight; a sister and brother in-law: Gladys and Clarence Rowley; a brother, Monroe Carl Dennis and niece, Janet Rowley.

To order memorial trees or send flowers to the family in memory of Marie McKnight, please visit our flower store.