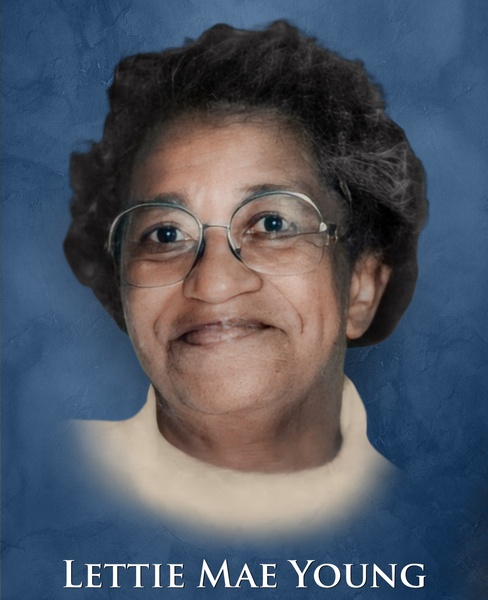 Lettie Mae Young, peacefully transitioned from her Earthly body on Wednesday, July 6, 2022 at 11:30 a.m. to be with the Lord after taking one last ride to her appointment in Cambridge with her favorite Doctor, Dr. Narr. She could not wait to talk to her and get the latest scoop about her daughters.

“Lettie Mae”, as she has been called by many, was born on November 18, 1926 in the Fork Neck district where she was also raised. She attended school in the Dorchester County Public School System. She and her then husband Alvin Young lived in Cambridge for a while until moving that same Cambridge house to Hawkeye Road where she lived the rest of her life.

She was a faithful member of the church and continued regularly until such time that she was not physically able to attend. From time-to-time, Mr. Bobby and Cousin Keifford would stop by to talk, sing church songs and pray with her. She always maintained her membership and affiliation with the church and the members - many of which either stopped by and/or called, including her Pastor Rev. Watts and when able to get inside, she either dropped off her communion or she served her communion.

Lettie Mae was employed by Coldwater Seafood in Cambridge, Maryland for many years, where she eventually retired. Later, she worked various odd jobs. She also spent her time assisting older women, wheeling them around in wheelchairs and taking them to various doctor appointments.

Lettie Mae was a great woman, mother, friend, and role model. She was the epitome of honesty, loyalty, trustworthiness, God-fearing and a true believer in the faith and doing her works, etc. She helped those that needed to find their way, spoke with those that needed a kind word, helped those who needed a lift and those that needed a boost. To me, at the time, she was doing too much, but in hindsight, she was doing what I can only assume God led her to do and be. Can't say it was all good because many times we would go somewhere, and she would talk to people forever (too much) and never shut up. An outing that normally should have taken us about 15 minutes took an hour. She saw no one as a stranger. Basically, she helped many and lived James 2: 14-16. - she knew and understood that faith without works is dead.

One thing that can be said with certainty is: “death does not mean gone forever”. As far back as 25 years ago, most of the people she knew that passed were never really gone. I say this with complete honesty and truth, there were not too many days that went by that she did not speak of her family and friends. It was an everyday thing. It got so bad that I put people in categories: The Hawkeye Crew, Ms. Lena, Aunt Emma (everyone else called her Granny), Ms. Doris, Mr. Jimmy, Tater, Buddy, Douglas and Ms. Sue; The Thompsontown Crew, Dottie Ann, Ms. Shirley and Mr. Bobby; her diehard friends, Ms. Celia Mae, Ms. Lena, Ms. Hazel, Asbury, Nicey Mae, Ms. Mildred and Parthenia. As far as family she spoke of her mom, dad, brother and of course her Alvin.

She not only spoke of and had memories of those that passed, but of those that are still here. She looked forward to when Cousin Keifford would pop up and pray with her. She truly enjoyed that party that Rouline had at your house (I got tired of hearing about that party, I think she forgot that I was there too). Rouline would pop up early in the morning (couldn't shake Rouline, she always popped up and knocked on her back bedroom window). Ms. Geraldine was a Godsend, and her ears should have been burning. Frequently spoken of was Sherry, both Delores', Maria, Ana, Ms. Mildred, Karen, Sharon, and Ms. Thompson. When she asked me whether I have seen any of them when I was out, I said with a smart mouth, “no, I was not looking for them. If you want to talk to them, call them.” For years she stopped talking on the telephone. I told her that you always mentioning them, they’ll come around.

This is the lesson that I learned, just because a person is not physically around does not mean that they are gone. As long as you keep the person alive in your heart and mind they are never forgotten. It is clear that when you genuinely love and care for someone, here or not, they will always be alive, in mind and spirit.

While Lettie Mae had no children of her own, she leaves many that were like her children and family members to cherish her memories: Derrick Sampson, Renda Luke, Sheretta Jenkins, Kendrick Jenkins, Sherita Jenkins, Edith Henry, Delphine Slaughter, Florine Elbert and Tyshine; grandchildren, Brandon, Chuck, Mel Salgueiro and Abdiel Luike.

In addition to her parents, J. Fisher and Raymond Fisher, her Husband, Alvin Young and her sole brother Wilbur Fisher preceded her in death.

To order memorial trees or send flowers to the family in memory of Lettie Mae Young, please visit our flower store.