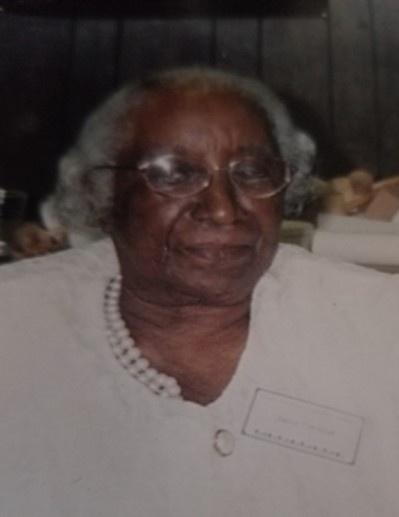 Julia Regina Cornish was born to the late Irving Armstrong and the late Maggie Cornish on February 2, 1920 in Taylors Island, Maryland. She departed this life of natural causes July 13, 2020 at Chesapeake Woods Nursing Home in Cambridge, Maryland.  Blessed with a long life, she was 100 years old. Mrs. Cornish was educated in Dorchester County Public Schools and the first in her family to graduate high school.

She married William H. McGee and from this union was blessed with 5 children, Lorenzo McGee, William McGee(deceased) (Carol), Kathern Monroe(deceased) (Albert-deceased), Curtis McGee and Gary McGee (Lorraine). Their fruitful marriage ended when William preceded her in death in 1948.

Years later Julia married the late Irving Cornish and from this union a daughter Etta(deceased). Sadly she was widowed again when Mr. Cornish died in 2005.

Over the course of her lengthy life Julia worked in many industries native to the eastern shore including canning factories and seafood packing. She retired from her final job as a seamstress at the Perfect Garment company of Cambridge, MD in 1984 after many years of dedicated service.

Julia was a religious woman who loved God. She instilled and promoted the love of God in her children and grandchildren both by her teachings and how she lived. Julia adored spending time with her family and friends or even just talking to them on the phone. Chicken wings and fresh baked bread and pringles chips were some of her favorite foods. She often told those bring her food “Don’t forget the bread”. She was an avid sports fan and enjoyed following local teams even if they were not having the best season. She loved the Baltimore Orioles, Baltimore Ravens, Washington Redskins, and the Philadelphia Eagles. Favorite athletes included Tiger Wood (the only golfer she would watch) and Lamar “Don’t touch #8” Jackson of the Ravens. Some of her other memorable expressions were “I’ll See You When I See You”, and Hope So”.

To order memorial trees or send flowers to the family in memory of Julia Cornish, please visit our flower store.