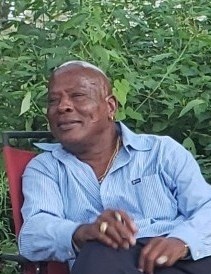 Jeffrey Donnall Meekins, 62 of Baltimore, was summoned to eternal rest on Tuesday,  January 14, 2020 at his residence. Born on March 4, 1957 in Dorchester County, he was the son of the late Geraldine E. Meekins and Otis Cooper, Sr. Jeffrey attended the public schools of Dorchester County, eventually graduating from Cambridge Senior High School with the class of 1975.

Affectionately known as “Rags,” Jeffrey accepted Christ in his latter years and could be found reading his bible every morning at 7AM. He worked various jobs, with the last being BenMatt Industries in Federalsburg, Md.

Jeffrey was a loving brother, father, uncle and friend, who never complained about anything! He always had a joke or two and loved to spend time with family and friends and would always let you know he loved you. In his free time, he enjoyed fishing, selling CD’s and selling a few items at yard sales.

In addition to his mother, he was preceded in death by two sisters, Carolyn Meekins-Blake and Janet Meekins.

To order memorial trees or send flowers to the family in memory of Jeffrey Meekins, please visit our flower store.