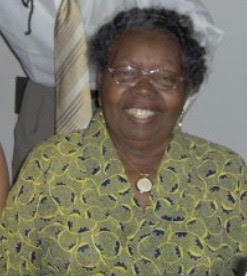 Jearlen Victoria Young Jews, 89 departed this life on Sunday, February 25, 2018 at the University of Maryland Shore Medical Center at Dorchester surrounded by her loving family and friends.  She was born to the late George and Beulah Young in Crapo, MD on May 5, 1928.  She was affectionately known as Vicki, Mrs. Vick and grand mom.

Victoria was united in marriage to the late Russell Wesley Jews.  From this union she was blessed with six children, Diane, Russell Jr., Judith (Pat), Jean (Nute), James (JimBoy) and Ronald (Ronnie).

She was educated at Christ Rock School where she graduated.  Victoria was employed with Trappe Frozen Foods, and American Legion Post #91 for over 60 years.  She also did seasonal work shucking oysters and picking crabs.  Around town she was known for her famous yeast rolls.  Every year at the Dorchester Showcase she would sell rolls along with her friend Barbara Jones.

Victoria was a lifelong member of Bethel AME Church where she served as a Trustee Aide, Usher, Homecoming Committee, Sunshine Club and the Tribe of Levi.  She loved singing and praising the Lord.  She loved her church and was faithful in attending until her health began to fail.

Victoria was also a member of the Center Street Gang.  She was known as the Mayor of Center of Street. Everyone loved her, checked on her, and respected her to the highest.

She leaves to cherish her memories one sister Betsie Johnson; two daughters: Diane Cooper and Jean Jews Cornish; one son Ronnie Jews (Mildred); a grandson whom she raised Russell Darnell Dolberry (Daphne); an adopted daughter Nancy Humphries; two great nieces: Vanessa and Samantha Young; a goddaughter Normalee Cooper Cornish; a special nephew Arvell Johnson; 23 grandchildren, 4 step grandchildren, 37 great grandchildren, 26 great great grandchildren along with the family of the late Margaret Smith. Special thanks to Sharniece Adams for being her caregiver during the latter part of her illness and a host of other relatives and friends.

In addition to her husband she was preceded in death by three children: James, Judith and Russell Jr.; a granddaughter Latonya Jews; three sisters: Magaline Young, Dolly Young and Mary Johnson; and a brother Leander Young.

To order memorial trees or send flowers to the family in memory of Jearlen Jews, please visit our flower store.