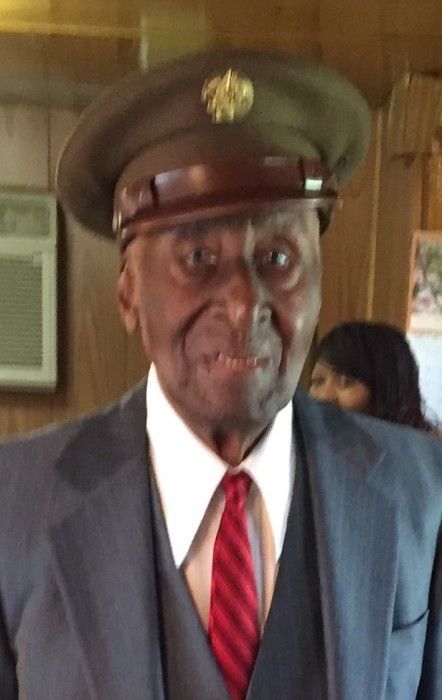 What can we say about one who has reached 102, “The span of our life is 70 years, or 80 if one is especially strong.  But they are filled with trouble and sorrow; they quickly pass by, and away we fly”   Psalms 90:10

We can say James was given special strength to live to be 102.  He was blessed.

James Albert Walley was born March 28, 1916, to the late Fred Walley and Hilda Camper of Talbot County.  He was only able to complete the 5th grade because he had to work with his mother. James passed away peacefully on Tuesday, April 10, 2018 at his home, where he wanted to be until the end of his life.  He was attended by his loving caregivers, Carolyn, Barbara, Jerry and LaDonya for seven months.

On November 2, 1942, James decided he wanted to serve his country by enlisting in the military service.  His battles and campaigns took him to New Guinea, Fiji Island.  He completed his service on December 27, 1945.

He was honored for his service by receiving the Good Conduct Medal, Asiatic-Pacific Theater Ribbon, American Theater Ribbon and World War II Victory Ribbon. He was employed with Edgell Mobile Homes until his retirement. James was married to Amelia Tilghman for 10 years. In 1958, James formed a family with his wife Bernice Copper and her three sons,  Leonard (24), Samuel (19) and Ernest Copper (10).

James was a loving son toward his mother, Hilda to the very end of her life.  He would say “Me and Mama and Mama and Me”.  He was Hilda’s only child. James   enjoyed family dinners with the Copper families in Maryland and New Jersey and the Roberts family in Washington, D.C.

One of his favorite things was taking his boat out fishing and crabbing.  But most of all he enjoyed sharing his crabs with  Bernice, family and friends. He enjoyed spending his time with his grandchildren going fishing and picking strawberries.  He also liked collecting coins. When baseball season began, you could find James on the porch in his lounge chair watching his favor team.

In 2008, James lost his wife Bernice in death.  He had a life and death situation in his home, God blessed James (92) with Francine and Arthur Banks.  They rescued him and made sure he had the right medical care.  They lovingly carried him for his doctor visits, shopping and shaving.  They were more than neighbors, they were family.

He was known at the Envoy Rehabilitation Center as a “nice man”.  To the nurses they were sweetie, sweetie, kind to him.  James was truly blessed to reach 102.  He has seen it all many have come and many have gone, but there can only be one James Albert  Walley.

In addition to his parents,  he was preceded in death by his wife, Bernice Walley, uncle, Lawrence Walley, Leonard Copper, Samuel Copper, Kenny Copper, many of the Copper Family and the Roberts Family.

To order memorial trees or send flowers to the family in memory of James Walley, please visit our flower store.