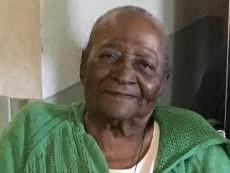 She was born May 16, 1922 in Baltimore, MD, daughter of the late Sanders Wright and Marie Gross. Playmate, as she was affectionately called by family and friends, was employed with SW Friel’s for a short period of time. Although she referred to herself as a homemaker, Irma was quite a renaissance woman and foster mother who opened her home and heart up to the entire village of children and families of Chester.

As a faithful servant, Irma was often busy in the business of the Lord serving in many roles from Usher, Pastor’s Aide and Senior Choir Member during her time at both Cox Neck Church.and later as an active member of Kent Island Church of God.

Irma enjoyed selling pies and dinners for the church and to the watermen, preparing candy apples for the children in the community, sewing, and styling hair – she was indeed the community beautician extraordinaire and “real estate” maven who rented out her properties. Irma could always be counted on to give community folks a lift around town and across the bay. She too enjoyed the joy of traveling and took many road trips up and down the east coast.

In the words of Langston Hughes “Life ain’t been no crystal stair. It’s had tacks in it and splinters and boards torn up and places with no carpet on the floor – Bare. But Irma’s “been a-climbin’ on and reachin’ landin’s and turnin’ corners  and sometimes goin’ in the dark where there ain’t been no light.” Irma’s now climbed the crystal stairway to heaven and her soul is rested.

With her work on this earth done, Irma is preceded in death by her parents, her husband William Henry Crawford and two sons, William Bernard Crawford and William D. Crawford.

To order memorial trees or send flowers to the family in memory of Irma Crawford, please visit our flower store.