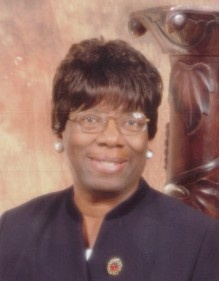 Gloristeen P. Pinkett was born on July 25, 1936 in Bethel, NC to the late William and Mattie Powell who later moved to Norfolk, VA.

As a Teacher, the influence she on had on her students spanned generations. It was not uncommon for her former students to see her in the community for years after they were in her classroom with stories of how much she influenced them.

She was Inducted into Queen Anne's County High School Athletic Department Hall of Fame-2007, Awarded Alpha Kappa Alpha Sorority Inc. North Atlantic Region Basileus of the Year in 1988, Eastern Shores Beautician Association Community Service Award 2001, Tri-State Associations President Award 2008, selected by the Pride Magazine as one of the Outstanding Black Women in Delmarva 2013 and Bethel Church Women of Quiet Distiction 2016, along with many other Recognitions.

Gloristeen had many hobbies that she loved, she was an avid reader and loved to travel with family.

While Gloristeen did not have any biological children, she firmly believed that "It takes a village to raise a child" and played a vital role by supporting many children through mentoring and teaching.

Gloristeen was preceeded in death by both her parents William and Mattie Powell, one sister Queen Chalmers of Norfolk, VA.

She leaves to cherish her memories one sister, Miriam Montgomery of Poway, CA, one brother, Tracy Chandler of Downeytown, PA, three nephews, Calvin Montgomery, Jerome Powell and Ronnie Powell, six nieces Jeanette Williams, Carol Dorsey, Sharon Miller, Kay Benson, Cynthia Barnes and Mia Carter, one God-son Keith Camper and host of great nieces and nephews all of whom she viewed as her children.

Gloristeens motto was: "Always remember to "Reach Back" and help others along the way. Also strive to make a difference in the lives of the people you touch."

To order memorial trees or send flowers to the family in memory of Gloristeen Pinkett, please visit our flower store.