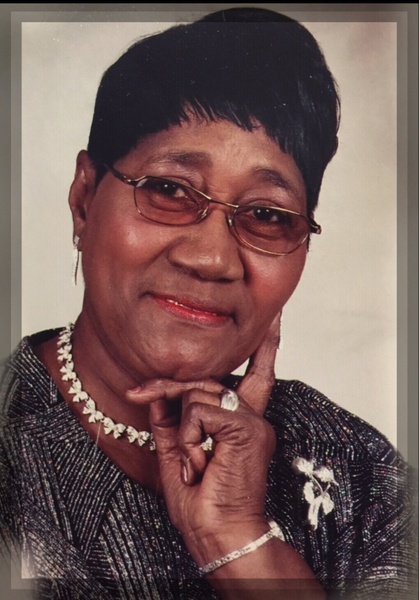 
Gloria Ann Bailey,  was transitioned from “labor to reward” on Sunday, January 28th 2018 at MedStar Union Memorial Hospital in Baltimore, Maryland. Gloria, was born September 7, 1939 in Cambridge, Maryland-Dorchester County. The daughter of the late Clarence & Viola Wilson. She attended the public school system of Dorchester County, before graduating from Mace’s Lane High School, her beloved Class of1957.
Gloria married the late Reginald Gilbert Bailey, Sr of Cambridge, Maryland. They both came from families that not only had a devotion to serve the Lord with gladness, but who also had  a love for- all things Bethel A.M.E. Church (Cambridge)..
Prior to being cared for by her loving and devoted niece, Velma Stanley in Baltimore over the last several years during her illness, Gloria was a proud life-long resident of Cambridge, Md.  Among her family circles, she was affectionately called “the Mayor”, because she knew and related to everybody, even in other counties on the Eastern Shore.
Gloria was a life-long member of Bethel A.M.E. Church. Her membership began with the “Cradle Roll”. Gloria had a heart and compassion to serve others over and above herself. As a true servant of the Most High God, she wore many different hats in her service to the Lord. She served as the Vice President of the Senior Usher Board, an Advisor to the Junior Ushers, Co-Chairperson of Women’s Day, Homecoming Committee, 150th Church Anniversary Committee, Community Unity Banquet Committee, and the Kitchen Committee. She was also a member of the Trustee Board, the Tribe of Levi - Bible Study Class, and the NAACP.
In addition to this, Gloria served as a Secretary/Administrative Assistant to former Pastor’s as well as the Secretary for Local #27 United Food and Commercial Workers - U.F.C.W.  She would later write the first Union contract for Chung King Incorporated.
Gloria, in her secular capacity, worked for such companies as Chung King, R. J. Reynolds, Mail Well Graphics, Super Fresh Supermarket, Fresh & Green, Portside, and American Legion Post #91. She and her late husband, Reginald Bailey, were community entrepreneurs.
She has been honored twice with the award for “Outstanding Achievement in Maryland’s Most Beautiful People” “She has rightfully won the distinction of being the first recipient of our Phoebe Award”. “ We commend to you our sister Phoebe, a servant of the church .... who has been a helper to many”.  Romans 16:1-2
Gloria will always be remembered for her giving personality and unconditional love for others. She has a host of surrogate son’s and daughters, too numerous to mention, that even goes across racial lines. Her warm infectious smile always lit up the room wherever she was present.
She leaves to cherish fond memories, one son, Rev. Harlan L. Bailey I, (Corliss), five grandchildren- Diani, Jordan, Jakobi, Kayla, and Harlan II (Chelsea, Alabama), one brother, Cokeland Wilson (Cambridge, Md), two brothers in-law, Richard Bailey (Cambridge, Md.) and John Bailey (Boston, Ma), one sister in-law, Omega Taylor (Lexington Park, Md.) and a host of nieces, nephews, cousins, and friends.
In addition to her husband and parents, she was preceded in death by, son, Reginald Bailey, Jr., daughter, Tanya Bailey, three sisters, Gertrude Fisher, Altoe Wilson, Dekota Stanley; three brothers, Sherwood, Yvon, Lawrence Jehew Wilson; father in-law, Russell Bailey; mother in-law, Rev. Blanche Bailey. Several aunts, uncles, sisters in-law, brothers in-law, nieces, nephews, and a host of cousins and friends preceded her in death.

O give thanks unto the LORD; for he is good; for his mercy endureth for ever.
1 Chronicles 16:34

To order memorial trees or send flowers to the family in memory of Gloria Bailey, please visit our flower store.