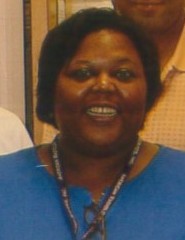 She was born at White Marsh Road in Madison, Maryland. She received her education at the Community College of Baltimore with an associate of Arts in Accounting.

Gladys was married to the late Thomas Leroy Hynson, Sr. who preceded her in death on May 1, 2013 at the Veterans Hospital in Baltimore, Maryland.

She leaves to mourn her passing, her mother Sarah Spicer, her sister Violet Spicer (both of New York) and her brother Stewart Spicer of Cambridge, Maryland. Two nieces Riza Spicer and Cassandra Spicer and a host of cousins, other relatives and friends.

To order memorial trees or send flowers to the family in memory of Gladys Hynson, please visit our flower store.