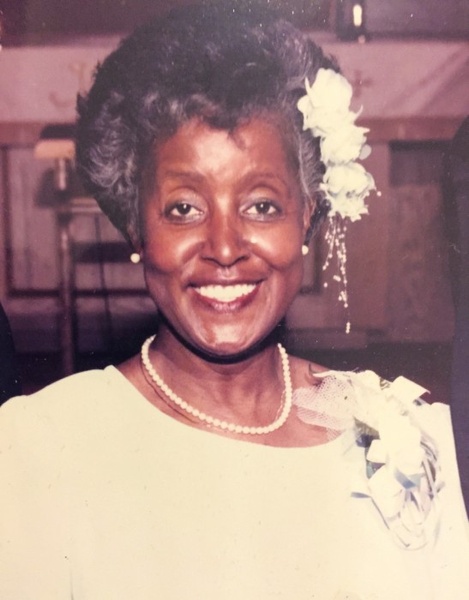 Geraldine (“Gerry”) was born on September 9, 1927 in Cambridge, Md. She was the daughter of Alphonsa Jackson and Carroll Waters, and granddaughter of Fannie and Jim Jackson.  Geraldine received her education in Cambridge Md., graduating in 1945 from Fredrick Douglas St. Clair High School.

After graduation, Geraldine briefly worked in Chester, Pa., and moved back to Cambridge where she was employed in a physician’s office. On November 23, 1950, Geraldine married her childhood friend and sweetheart Francis Boardley, when he was discharged from the U.S. Navy.

The family moved to Washington D.C. after the birth of their son, Howard Henry Boardley III in 1952. Their second son, Ronald (Ronny), was born in 1955 and they eventually moved to their home on Underwood St. in 1961 where they lived for 27 years.

Geraldine received her early religious background at Waugh Chapel Methodist Church where her Aunt Maria (Mert) Jackson was the organist.  While in D.C. she became an active member of Asbury United Methodist Church, serving on the Women’s Usher Board.

Although Gerry was busy working full-time and raising a family during the 60s and 70s, she found time to accompany Francis to many Postal Golf Association tournaments held along the east coast. Geraldine was also a member of the Charles Datcher Lodge No. 7 Order of the Eastern Star M.W.P.H.G.L. of D.C.  Geraldine retired from the U.S Postal Service and moved back to Dorchester County and the Boardley family home in Salem in 1988.

Upon her retirement, Geraldine returned to Waugh Chapel UMC and became actively involved in its ministries. Her positions and activities included: serving as  Co-Chairperson of the Staff Pastor Parish Relationship Committee; Vice President of the Communion Stewards; and, supporting the Older Adult Ministries.  She was honored by the Maryland Governor and U.S. Congressional delegation for her years of community service with the Hot Meals Ministry program, and work visiting the sick and shut-in.

Next to her love of God, Geraldine’s dedication to her husband and family was her highest calling.  She and Francis were married for almost 68 years.  Gerry loved cooking, keeping a beautiful home, traveling and doing whatever she could to help her family and friends. After they retired, Gerry and Francis traveled around the country to visit family and friends, eventually taking a trip to Europe to celebrate their 50th Wedding Anniversary.  However, they were extremely honored by the recognition they received from President and Mrs. Obama on the celebration of their 65th Wedding Anniversary.

Geraldine was especially known for her baking, from her homemade rolls and cakes to her famous Zucchini Bread. Other than Francis her greatest joy was her grandchildren: the “first set”- Sherry & Gina; and finally Jenell & Jason.  She was proud of everything they did and was quick to tell anyone about their accomplishments.  Her loving and compassionate ways, and gentle spirit will be missed by all.

Geraldine was preceded in death: by her husband, Francis Boardley; son, Howard Henry Boardley III; and, sister Betty Jackson Jews.  She leaves to cherish and celebrate her life: her son and daughter-in-law Ronald and Olenthia Boardley; her grandchildren, Jenell D’Orsay Boardley and Jason Milton-Howard Boardley; her beloved nephew and wife Milton (Tony) and Beverely Jews; grand-nieces, Sherry Paige and Regina Conway; and, many  cousins, relatives and dear friends.

To order memorial trees or send flowers to the family in memory of Geraldine Boardley, please visit our flower store.