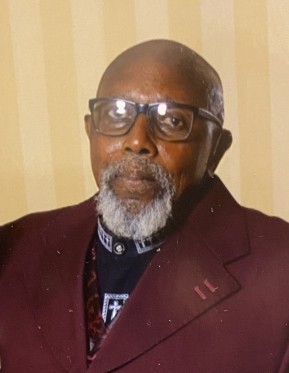 Ecclesiastes 3:2 says, “ to everything there is a season, a time for every purpose

planted. “ So nothing is out of order here today; life and death are continuing

cycles that are common to life. Join us now as we bear witness to the planting and

our brother, our uncle, our cousin, our friend; Frank Johnson Bell.

Frank was born September 3, 1945 in Lyndhurst, Virginia to Frank J Bell and

Gurdurda Brown Bell. He was the youngest child of nine children which included

five boys and four girls. He received his early education in Lyndhurst and after

finishing Central High School; he attended a Vocational School to learn the trade

of welding. Frank moved to Maryland (Easton) in the late seventies. For the past

thirty years plus, Frank has been employed by Chesapeake Center Inc. in Easton

as a Transportation Supervisor. His co-workers remember him as a warm, friendly

Frank’s family was firmly rooted in the church. It was then, and still is riddled with

himself, joined the church in Virginia at the tender age of 11. After coming to

Maryland, Elder Bell joined the Monument of Love-Church of God and Christ, then

located on Dover Road in Easton. When in 1988, the congregation moved to a

new location in Vienna, Md., Frank willingly followed. There, under the

mentorship of his esteemed friend and pastor, the late Rev. Benjamin Van Zandt,

legendary generosity. Just a few of his works include: Sunday School

Superintendent for over thirty years; the Trustee Board; Men’s Fellowship

Coordinator; the Pastor’s Anniversary Celebration committee; and the

Coordinator of the Youth Scholarship Fund. One of his church members is quoted

as saying,” it will take three men to do the work that Frank did! “ Frank was fond

of telling people both young and old that “when you give God your Best, God will

give you the Best.” As a member of the Eastern Shore Ecclesiastical Jurisdiction of

Maryland Church of God in Church, Frank lived by that creed.

In 1983 Frank built a new home and moved to Queen Anne, Md. with his then

wife, Ada Wilmer Bell. Over the years, Frank took much pride in puttering around

in his house and garage while maintaining his large property. Everyone on Fox

Meadow Rd. “knew “Frank and respected him for how well he kept his residence.

In 2012, Frank, tired of being a widower, decided it was not too late to “jump the

broom” again. He thereafter, in order to enhance his golden years, exchanged

marital vows one last time with “the love of his life”, Myrtle Young Bell.

Frank Bell had many interests. He loved spending time with family and friends.

Nothing pleased him more than large family gatherings at his home or in Virginia.

He thoroughly enjoyed getting a good barbecue going, or a big bushel of crabs for

a “pick-around”, or pounds and pounds of fish for an old fashion community fish

fry. Frank was a smiling, out-going man who loved to talk. If the audience was big,

the more fun he would have, telling his storehouse of “tales of ole” that always

seem to end with an unexpected twist of good humor. He had a wonderful

curiosity to learn and to see new things which instilled in him a passion for travel.

Each year he would purposely pick a place he had not seen, and off he would go.

In recent years, he and his wife Myrtle traveled numerous times to New York City,

to Las Vegas, to the Grand Canyon, to Key West Florida, and finally to a place he

most desperately wanted to see, Mount Rushmore. And because he loved being

in his car, he drove to every last one of them! If one could say that Frank had a

slight kink, it might be that at some point early in his life, he acquired a fearless

passion for motorcycles, speed, and cars. He could fix almost anything on a car

and loved tinkering with them. To him, watching nas-car racing was a rite of

passage. He collected miniature cars and 65 % of his TV time was spent watching

the Barrett-Jackson Car Show. He and his wife were also active members of the

but he also could appreciate new adventure and was not ashamed to admit it.

Frank simply loved to live life and he had a full life, well lived. We ALL shall miss

Meadow Rd. in Queen Anne, Maryland. Frank was 74 years old. He is survived by

a few great grandchildren and a multitude of nephews, nieces, cousins, church

family, and friends. Frank was preceded in death by his parents, three brothers,

three sisters, and one son.

To order memorial trees or send flowers to the family in memory of Frank Bell, Jr., please visit our flower store.

Monument of Love Church of God in Christ

Monument of Love Church of God in Christ