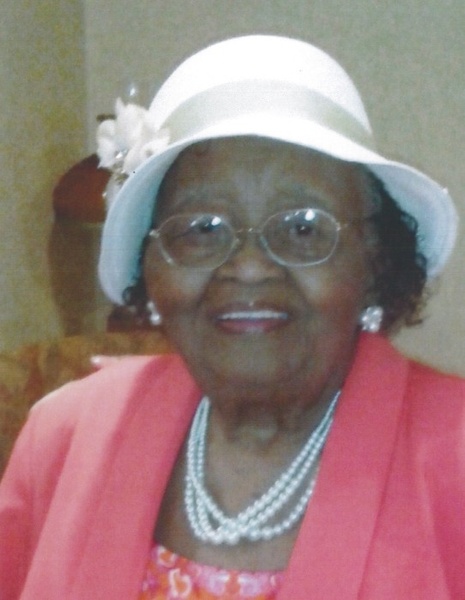 EVELYN MARIE SCOFIELD TAYLOR was born on June 7, 1923 to the late Clarence Edward and Mary Arevia Scofield in the small community known as Deep Branch, located    between Denton and Hillsboro, Maryland. In the early  morning hours of Wednesday, April 20, 2017, Evelyn knew her job on earth was complete and yielded to GOD’s inspirational message; “Well done thy good and faithful servant, come and receive thy reward”.  At the tender age of 93, she departed this life peacefully at the Caroline Nursing and Rehabilitation Center in Denton, Maryland.

Evelyn was the eldest of eight children and was often tasked with taking care of her younger siblings. During her childhood, Evelyn attended Bell’s Chapel A.M.E. Church. She graduated from Lockerman High School at the young age of 16 as the Class Valedictorian. Evelyn married the late      Wayman Woodlin Taylor, moved to Greensboro, Maryland and together they raised their five beautiful children. To help support her family, Evelyn worked for private families, at Caroline Poultry, and finally at the Benedictine School, where she retired after 27 years. After retiring, she served on the Board of Directors of the Benedictine School and    remained an Honorary Member of that Board until her death.

Evelyn was an active mother, grandmother, great  grandmother, great-great grandmother, sister, aunt, cousin, friend, and confidante to many. She was always ready to  provide words of wisdom to anyone. She loved cooking for her family and friends. She leaves fond memories of her   vegetable soup, beef stew, homemade biscuits and rolls,   cinnamon buns, pound cakes, and apple butter. Evelyn  enjoyed spending time at the Caroline Senior Center where she painted beautiful ceramics that she loved to give as Christmas gifts to her family.  She loved to read, play dominoes, sing hymns, receive cards and telephone calls, watch Family Feud, eat sweets and her favorite color was PINK.

Evelyn participated actively in her church and Order of Eastern Star. She was an active member of Mount Pleasant United Methodist Church, which recently became a part of New Beginnings United Methodist Church.  At the local church level, Evelyn served on the Choir, the Steward Board, the Pastor-Parish Relations Committee, President of the United Methodist Women and was a Communion Steward. One of her greatest joys was baking fresh bread for the    communion service, as often as she could.  On the district and conference level, she served as President and Vice President of the United Methodist Women for the Easton District, Secretary of the Peninsula-Delaware Conference United Methodist Women, and Director of the School of Christian Missions. Until her death, Evelyn was the only living charter member of Fellowship Chapter #58, Order of the Eastern Star. She served faithfully as a member, Worthy Matron, Past Matron, District Deputy Grand Associate Matron, and District Deputy Grand Matron for District 4 of Myra Grand Chapter, OES, PHA.  She always loved the charitable work of the OES.

In addition to her parents and husband, she is predeceased by her daughter, Elaine; brothers, Clarence, Dorsey, Roger, Leon, and sister, Lucille.

To order memorial trees or send flowers to the family in memory of Evelyn Taylor, please visit our flower store.