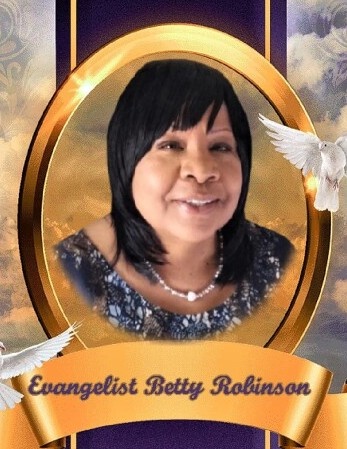 May The Life I Live Speak For Me

Betty graduated from Easton High School in 1971.  In high school, she was a Cheerleader and she loved to dance. That explained why she loved to dance so much for the Lord when she gave her life over. Way back then, God gave her a step in her feet leading her later to ministry work that she fulfilled.

Betty was always a hard worker and went on to her first employment with Yale Sportware in Easton, MD as a Seamstress for 30 years.  After her time ended at Yale, Betty went to work at Black & Decker for a few years.  After a little persuasion from her husband, Betty became a full time Wife & Mother. She enjoyed taking care of her family and running her household daily.  Betty always had a passion for children and nurturing them.  She would babysit and also help raise other people's children. Betty decided after her daughter graduated, to continue her education. Betty went on to get her Associates Degree in Early Childhood Development. She didn’t stop there, Betty attended UMES to earn her Bachelor Degree in Early Childhood Development as well as her Master Degree. Betty began teaching at Shore Up! Inc. in Easton, MD for 17 years until she retired in 2018.

In 1977, Betty met the love of her life named Jerold Samuel Robinson. They were united in holy matrimony on August 13, 1980.

When Betty got married, she followed her husband to church. She realized that she needed more and that was having God in her life. Betty was a member of Gospel Tabernacle Faith Church in St. Michaels, MD under the leadership of the late Georgene O. Thompson, where she heard the gospel preached in its fullness. Betty then repented of her sins, went down in the water in Jesus name.  Days later on her lunch break, Betty went home and sat in her chair when the Holy Ghost and Power fell down on her. She began to speak in tongues as God gave utterance. This literally happened on October 8th a day before her natural birthday. Oh what a feeling it was for her to celebrate both her spiritual and natural birthday like that.

Betty worked diligently in the ministry.  She was the Youth President where she would put the Christmas and Easter programs together. She loved getting the outfits together and getting the skits prepared for the children. Betty would hold rehearsals to make sure the plays went as planned and that God would get the glory. She served on the Missionary Board, Praise Team, Usher, Choir, Teacher, Cleaning Committee, Prayer Team and Women’s Purity. Even with all the jobs that Betty held, God had yet a special calling on her life. That was to preach the gospel and she had such a burning in her soul. Betty became an licensed ordained Evangelist in the church and would preach down the walls. Who would have known that such a soft spoken, kind, gentle woman of God was a mighty giant in God’s kingdom. When Betty opened her mouth it would shake the very foundation and the anointing would fall in a mighty way.

Betty later became a member of New & Living Way Apostolic Church in Mardela Springs, under the leadership of the late Bishop Robert Fooks, Sr. Betty worked in the ministry as an Evangelist, teaching and preaching God’s word. She was an Altar Worker and believed in seeing souls delivered and set free. Betty would take time for the saints, extend encouraging words and loved on them.  The last time she preached, deliverance was in the building, souls were set free.  When she would read a scripture, she read it with such grace that the church was turned upside down.  The saints went into a straight praise.  This is just the sweet soul that God had anointed for the calling. Betty loved God and loved his people.

One thing about this sweet woman is that she lived a life that was pleasing to God.  Betty never changed, always stayed the same. She touched so many lives that she became “Mom” to a lot of people.  Betty always had a dance in her feet and shout in her voice.  She would break out “Hallelujah” and her feet would be running.  Betty was very nurturing and loving to anyone she came in contact with.  She would alway find the best in people no matter what they did or said.  Most of all she loved her entire family and wanted to make sure everybody was alright.  She was a giver, and would give her last if she needed to, along with her time, heart and soul.  Betty also Co-Founded Bountiful New Beginnings Inc. where she worked and served on the board until her passing.

To order memorial trees or send flowers to the family in memory of Evangelist Betty Robinson, please visit our flower store.