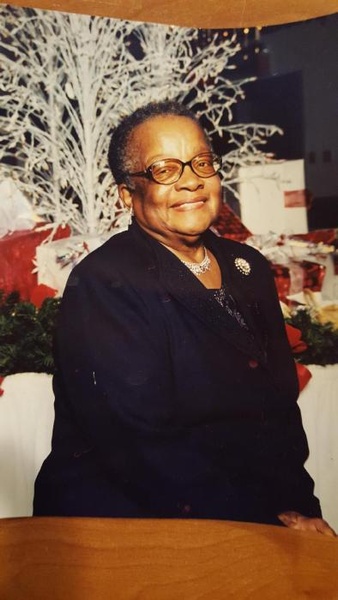 Elsie Lee Marine Pinder, departed this life on January 1, 2018 at home in Upper Marlboro, MD, at the age of 91. She lived a blessed and fruitful life. She was affectionately known as “Mother Pinder”. She was a popular, friendly, and giving person.

Elsie was born to the late Charles W. Marine and Annie L. Marine in Christ Rock, Maryland on March 14, 1926. She was the eighth of eleven children. She attended Stanley Institute School in Christ Rock. Elsie had a pet goat when she was a child.

On April 29, 1950, she married the late, Woodrow A. Pinder, Sr. who passed July 1993. They were married 43 years before he passed. God blessed them with three children, Linda, Carolyn, and Woody (Woody passed on December 8, 1997). Elsie and Woodrow raised their family on Hudson Rd, Cambridge, MD.

Elsie accepted Christ as her Savior when she was 14 years old. She later rededicated her life to Christ in 1978. She and her late husband Woodrow were faithful members at Christ Rock United Methodist Church. Elsie sang in the choir and served on church committees. After rededicating their lives to Christ, Elsie and Woodrow began to attend Bible Studies in Cambridge and they grew in Christ. Over the years, Elsie was a member at Christ Rock United Methodist Church, Tri-Life Christian Center, Beracah Baptist Church, and lastly New Carrollton Bible Church.

During her young adult years, Elsie worked as a Photographer Assistant at Chase Studios in Cambridge. While raising her children, Elsie primarily was a Homemaker. She did however work a few jobs including factory worker, and a nursing assistant. Later, she and Woodrow became Shaklee Distributors. They loved meeting people and telling them how to improve their health. They loved the associated travel that included trips to San Francisco and to the Bahamas. After the death of Woodrow, Elsie worked part-time for the State of Maryland as a Senior Aide at the Harriet Tubman Organization.

During her senior years, she relocated from Cambridge to Easton, MD and lived in the Park View Senior Apartments for several years. In 2007 she  relocated to live with her daughter, Carolyn in Upper Marlboro for over 6 years. In 2013, she moved to Largo Landing Senior Fellowship Hall in Upper  Marlboro. In 2015, she made sachet bags for each of the residents and staff members. She was an excellent seamstress. She loved to cook, bake, and freely share her goodies such as cowboy cookies and banana bread. When Elsie’s health declined in May 2017, she moved back with her daughter, Carolyn.

To order memorial trees or send flowers to the family in memory of Elsie Pinder, please visit our flower store.