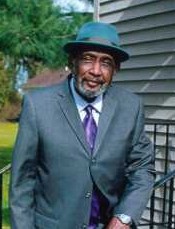 Edward, better known as “Ed,” was born on May 9, 1933 in Upperville, VA to the late John and Ivory Thomas. He was the youngest of eight siblings. He was educated in the Queen Anne’s County school system located in Centreville, MD. After graduating from Kennard High School in 1951, he proudly served in the United States Army beginning May 25, 1953 as a Private First Class (PFC).

He returned home to Gouldtown, a suburb of Centreville, and later married the love of his life, late Marcella Mary Ellen Williams and remained in Gouldtown for a period of time.

Later in life Ed and Marcella moved to Williamsburg, a suburb south of Easton, MD. Ed was a humble man, following in the footsteps of his father and father-in-law while maintaining the lawn on their Williamsburg       gift-given property whereas his late wife, Marcella’s role was to upkeep the preservation of the flowerbeds around their home and yard. He spent several hours riding on the lawnmower cutting not only his grass but other neighbors as well.

Ed was employed at John D Sheetz as foreman, building and repairing bridges throughout Delaware, Maryland, and Virginia for 40 years until retirement. He then went to work for UStar for five years.

Ed became a member of the American Legion, Blake-Blackston Post #77 in Easton, Maryland. Another passion was his preparation of the annual 4th of July celebration for all family members and friends held at his home.

Being ambitious about repairing broken items such as sheds, platform beds, cars, trucks, lawn mower, plumbing, electrical tools and gadgets, repairs inside and outside house repairs applying shingles, etc. He was eagerly passionate about making certain that he remediated any project for the safety of his home for his family.

Ed enjoyed sports using his speed and agility to play baseball on a local negro league team named “Indians” in Centreville, MD in Queen Anne County and The Easton Braves during his earlier years. However, his favorite sport was being a skillful hunter with Beagles, his hunting dogs, for rabbits, etc. His late brother James, children, nephews, and friends would accompany him on Saturdays in the wooded areas. He enjoyed watching sports, especially baseball and football games. He enjoyed spending time with his family playing board games, particularly, checkers, dominoes, and pinochle. Ed was a softhearted, considerate, and tolerant person who assumed a “surrogate” role for his grandchildren, nieces, nephews, and other children in Easton.

Ed decided to give his life to Christ in June 1993 at his son’s, now Bishop Patrick O’Neil Thomas, trial sermon, and continued his Christian journey as a dedicated trustee and choir member of Williamsburg Methodist Church in Williamsburg which merged with Waters United Methodist Church in Oxford, MD. He was a pleasure to talk to once you got to know him. He was a true gentleman, highly accomplished and always considerate and humble. His life deeply touched his family, friends, and members of Waters United Methodist Church.

To order memorial trees or send flowers to the family in memory of David Thomas, please visit our flower store.