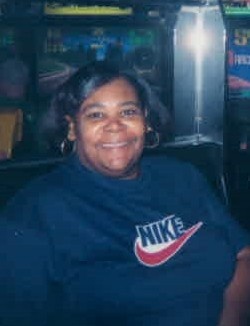 Cynthia Dawn Cole of Grasonville, passed away on February 22, 2020 at the Seasons Hospice in Newark, Delaware.

She was born March 15, 1962 in Easton, Maryland, daughter of the late James Cole and Gladys Hill, and was affectionately known as“Boodie”  and “Boodie Ball.”

Cynthia was educated in the public schools of Queen Anne's County and later attended the Old Dominion Job Corp. in Lynchburg, Virginia where she majored in the Food Service Program.

Cynthia loved her son Benji and special friend James Carpenter; they were her world.  She also loved her many friends and family gatherings .  There was never  a dull moment when she would play spades and “shoot the breeze.”

Her favorite song was “Jesus Dropped the Charges” and her family has many fond memories of Cynthia.

In addition to her parents she was preceded in death by two brothers, Alfred and James Cole, four nephews, Firmaine Moore, Antoine Moore, James Moore and Andre Moore.

To order memorial trees or send flowers to the family in memory of Cynthia Cole, please visit our flower store.