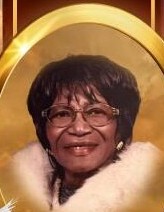 Deaconess Clara Bell Tilghman of Cambridge, MD was born October 27, 1925, in Oglethorpe Georgia to the late Charlie and Martha Walker. She departed this life January 28, 2022 at Chesapeake Woods/Autumn Lake after a brief illness. She was 96 years of age.

She received her education at the public schools of Oglethorpe Georgia. At the age of eighteen she came to Cambridge, MD. She was united in marriage to Deacon Oscar Tilghman of Cambridge, MD on May 30, 1946.

She later join Mt. Olive Baptist Church in Cambridge, MD and became a Deaconess and the President of the Pastor’s Aide and sang with The Shinning Light Choir under the late Rev. John English. She continued to serve under the new name of the church, Greater Mt. Olive Full Gospel Baptist Church as the President of the Pastor’s Aide under the leadership of Bishop Anthony J. Dickerson. There she became a Missionary, a member of the Usher Board, and a member of The Building Fund Committee. She also was a member of the Elks Club (Progressive of Dorchester Temple No. 224 Daughter of I. B. P. O. Of Cambridge, MD) until death. Deaconess Clara Tilghman also was the Co-Founder of Tilghman’s rest home. She was employed by Phillips packing co, Trappe Frozen Food, She did many canning house jobs and later she was employed by Kool’s Ice Seafood Co. until 2019 when she became too ill to work.

To order memorial trees or send flowers to the family in memory of Clara Tilghman, please visit our flower store.