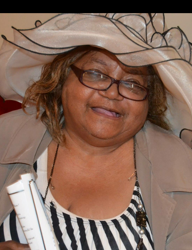 Bonita Cornelia Bell, 72, entered fully into the presence of our Lord on Friday, February 17, 2017 at the Baltimore Washington Medical Center, Glen Burnie, Maryland.  Bonnie, as she was most affectionately called, was born in Easton, Maryland on May 9, 1944 to the Late Russell, Sr. and Blanche Jenkins.

She was educated in the schools of Talbot County.  Bonnie was known as the best majorette at Moton School.  She was the forefront of all the local parades.  Following in her mother’s footsteps, most of Bonnie’s life, she did domestic work and cooked to help support her family.  Bonnie was greatly known for making breakfast, cream of crab soup and stuffed cabbage rolls.  Throughout her life, she was employed by Easton Memorial Hospital, H & G Restaurant, RWL Restaurant, The Parker’s, The Gannon’s, and William Hill Manor.

Bonita was a lifetime member of Union Baptist Church.  Her parents made sure that she regularly attended all services.  She was a devoted member of the usher board and the kitchen committee under Gloria Wilson and Nadia Caldwell.  Bonita loved to praise the Lord.  She never hesitated to share her testimony with anyone after she shed a few tears just thinking of all the things God had done in her life.  On the back pew, Bonnie always lifted her hands during worship service, and all could hear her let out a shout of praise.

Her interests were watching the soap operas, cooking, listening to old school music, watching her great- grandchildren, and most of all talking on the telephone.  Bonita called many members of her family daily just to check on them.

In addition to her parents, she was preceded in death by three brothers William, Robert and Jonathan Jenkins, a brother and sister-in law-Edward Roberts and Pauline Jenkins, a grandson-Terrance Bell, Jr., and a special and devoted friend Eugene Thompson.

She was deeply loved and will be truly missed.

To order memorial trees or send flowers to the family in memory of Bonita Bell, please visit our flower store.