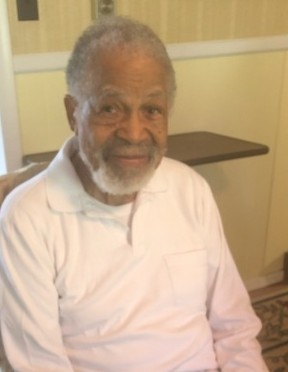 “A Lover of the Life He Lived”

Albert Rudolph Gibson, “Rudy,” to his family, and “Al,” to his co-workers, friends and neighbors was born on March 21, 1927, on Tilghman Street in the quaint town of Oxford, Maryland.  He lived there with his parents, Howard and Beatrice, and his six siblings, until the family moved to Baltimore, Maryland.  It was in Baltimore where Rudy was raised, and it was there that he received his formal education in the Baltimore City Public School System.  From high school, Rudy decided to enlist in the United States Navy, where he joined forces to defend this country during World War II.

Rudy met and fell in love with Dorothy Lee Kitchen, and they were married on March 29, 1947.  From their union, Olivia Aleta, NeVin Dorothy, and Yasmin Nanette were born.  With a family to care for, Rudy began taking on a variety of jobs to include being a delivery man for the Parks Liquor Store on North Avenue in Baltimore.  He eventually became employed as a civil servant with the Department of Health, Education, and Welfare, Social Security Administration, from which he retired in 1982 after 30 years of public service.

Rudy loved listening to jazz and played jazz records all the time!  There were many times when the house would be awakened to jazz music being played.  You would find Rudy, sitting on the sofa, with his eyes closed lost in the mood, while he imitated playing the saxophone or the trumpet.  One of his favorite pastimes was driving to Rhode Island with Dorothy for the annual Newport Jazz Festival.

Rudy loved his boats!  He always wanted to own a boat, and God blessed him with a small run about named, Easy Rider.  He would haul the boat from Jessup to Oxford, and make small trips around the Tred Avon River.  Later he traded in that boat for a 21’ cabin cruiser named, La Grandy, so named after his family ( G ibson, R udy, A leta, N eVin, D orothy, Y asmin).  On many occasions he would journey by way of water from the Tred Avon River to the Chesapeake Bay on the way to the Inner Harbor in Baltimore.  On many weekends, he took his grandsons on the Chop Tank River, where he would drop anchor and allow the boys to jump off the boat and swim.

Rudy loved the town of Oxford!  In the late 1970’s, God blessed Rudy to fulfill his dream to build a house in Oxford.  Upon residing in Oxford, he became an active resident of the town.  On many Sundays he was seen walking with his cousins, Frances Curtis (deceased) and Marjorie Gray, on their way to worship at the Waters United Methodist Church on Market Street.  His love of the town caused him to become more civic-minded, so he decided to campaign to be a town commissioner.  Rudy ran a successful campaign, and subsequently was voted in as an Oxford Town Commissioner from July 7, 1988 to July 4, 1990.  That dream house that Rudy built--Oh, how he loved that house!!!  There was not a place anywhere that he would rather have lived than there!!  Especially during times of his recent illness, NeVin or Yasmin would bring him to their home.  After a few days or even a few hours, he would say to them, “I want to go home.”  So, they would grant his wish and take him back to Oxford!  As his illness progressed, Rudy was adamant about remaining in his house!  By God’s grace, Rudy was able to remain there until caring for him at home became too great.  Rudy spent his final ten days under the loving care of the Eleanor A. Koons Hospice House in Easton.

After taking up residence in Oxford, and upon his retirement from the Social Security Administration, Rudy decided to pursue another love of his life—driving!!!  He thought nothing of driving for various dealerships as a car jockey.  He loved driving so much that he decided to establish his own driving service taking local neighbors to airports in Maryland, Washington, D.C., Virginia, Delaware, Pennsylvania and North Carolina.  When one of his granddaughters was considering colleges to attend, Rudy drove her and her friends to various college campuses.  He even ventured traveling alone and drove across country to visit his sister in Colorado.  Weekend trips to Atlantic City, New York, Rhode Island, and Atlanta were an absolute joy to him.

Rudy was the last son born to Howard and Beatrice, and God blessed him to the last of their children to be called home to live with them in heaven.  Rudy leaves to cherish his memory his two daughters, NeVin (Malcolm) and Yasmin, (his oldest daughter, Aleta, and son-in-law, Albert Stewart, Sr., preceded him in death); four grandchildren, Kelli Stewart, Samuel (Pete) Stewart (Kisha), Shainna Gibson and Clifton (Alex) Myers, (two of his grandsons, Albert (Hanky) Stewart, Jr. and Michael (Mikey) Stewart preceded him in death); four great grandchildren, Robert (DJ) Lee, Kevin Stewart, Emari Lee, and Lanaii Stewart; and one great, great granddaughter, Dakota Lee; angels on earth who lovingly and unselfishly ministered to their cousin Rudy any day, any hour, or any minute they were called, Paulette and George Albury; very dear first cousins, Marjorie Gray, John (Audrey) Gibson, and Emma Worrell; a host of loving nieces, nephews, and cousins; many loyal friends to include Holman Hallock and his sister Marshall Hallock, and his devoted Visiting Angels caregiver, Pat Brown.

God saw the road was getting rough, the hills were hard to climb.
He gently closed daddy’s loving eyes, and whispered, “Peace Be Thine.”
Daddy’s weary hours, his weary nights and his restless days are past.
His ever-patient worn-out frame has found sweet rest at last.

To order memorial trees or send flowers to the family in memory of Albert Gibson, please visit our flower store.