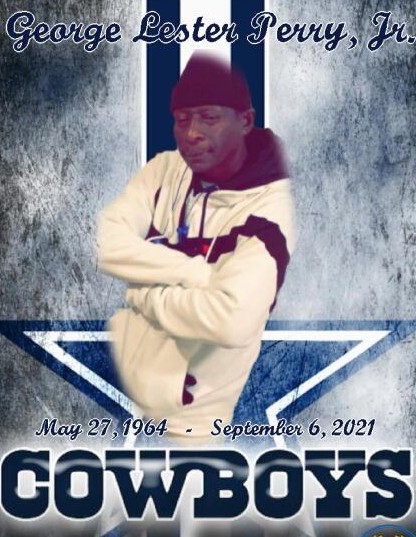 George Lester “Ju Ju” Pery, Jr., 57 passed away on September 6, 2021 at Tidal Health in Salisbury, Maryland.  He was born on May 27, 1964 to the late George and Helena Perry.  He was raised in Cambridge, Maryland and attended school in the Dorchester County Public School System, graduating with the class of “1982”.

“Ju Ju” worked for Clayton’s Crab Company for over thirty years in addition to doing construction work as well.

On May 27, 2006,  “Ju” married Vera, and they moved to Virginia to start their new life together.  Years later, he moved back to Cambridge, Maryland where he met his companion “Lorraine”.

In his spare time, “Ju” loved to listen to R&B Music.  His favorite song was “I’m Blessed” by Charlie Wilson. “Ju” also loved soul food, watching the “Flintstone’s, seafood, action movies and fiction books.  “Ju” was a die hard “Cowboy’s” fan or as the family would tease and call them the “Cowgirl’s”. The most important things to “Ju” were his family and girlfriend whom he loved unconditionally.  His favorite color was blue because it signified peace and security.  “Ju” loved being around family and hanging out with his friends  If he was feeling down, being around family always cheered him up.    If you wanted to upset “Ju” call him “Fat Boy”.  He was a natural born comedian.  He loved going riding with his favorite nephew Tyrone aka “Lil Man”.  They were always together day and night.  He was truly his “road dawg”! They had each other’s back no matter what.  “Ju” was ALWAYS the life of the party and everyone loved to be in his presence.

“Ju” was preceded in death by his parents George and Helena; a sister Sidonia; brother-in-law Larry and nephews Curtis and Kevin.

To order memorial trees or send flowers to the family in memory of George Perry, Jr., please visit our flower store.